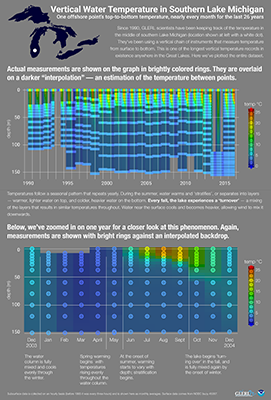 How is water temperature measured?

Where can I find Great Lakes water temperature data?

What is the current state of surface water temperatures for the Great Lakes Basin?

How do this year's water temperatures compare with previous years?

View this year’s surface water temperatures compared with all years since 1995:

Why are the lakes so warm some years?

The main reason we see increased lake surface temperatures some years is low ice cover during the previous winter. This allows the lakes to warm up earlier. The lakes absorb more solar radiation because the lakes were free of ice.

What does a longer period of unusually warm temperatures mean for the lakes system?

It’s important to differentiate between weather time scales and climate time scales. A single month or summer of high water temperatures may not have a lasting effect, for instance, if the following fall and winter are cool.

We’re seeing warming trends in regional air temperatures over the past several decades, which can cause longer periods when the water in the lake has warm surface waters and warmer water nearshore. When a lake settles (stratifies) into different layers, the cooler, denser water settles to the bottom of the lake. A thin middle layer separates the top and bottom layers. A layer of warmer water floats on top and the trapped colder layer beneath can contain less oxygen and nutrients as time persists.This affects where fish live depending on the species, how algae grow, and the quality of drinking water supplies.

A long-term study published in 2021 by NOAA GLERL in Nature Communications reveals a warming trend in deepwater temperatures that foreshadows profound ecological change on the horizon. See a news release we posted about the paper Climate-driven shifts in deep Lake Michigan water temperatures signal the loss of winter.

How do the warmer water temperatures affect fish?

Generally speaking, there are winners and losers in a warming lake. Different fish species prefer different water temperatures. Fish such as walleye and rainbow smelt that like cooler water will seek cooler deeper water. The young of some species like alewife and yellow perch have been known to grow better during warmer summers.

Extended periods of warm lake waters will reduce the mixing of nutrients between the cooler bottom waters and warmer surface waters. Without that mixing there is less food for fish to grow and thrive.

In some areas of the Great Lakes like Lake Erie's central basin, and in shallow bays, warm temperatures can spur the growth of harmful algae which can reduce healthy habitat for fish. The decaying algae which drops to the bottom can strip these areas of oxygen, which is essential to fish.

A warming climate that reduces ice cover can also harm the ability of fish to reproduce. Lake whitefish spawn and deposit their eggs on the bottom in shallow nearshore waters, so in years of extensive ice cover their eggs will be protected from waves and storm surge. Short, warm winters can also reduce yellow perch egg development and spawning.

Will these temperatures have impacts on invasive species?

Almost certainly yes, but exactly what that impact will be is more complicated. Many of the most recent invaders are warm-water species that will benefit from warming temperature.

Some of the more recent invaders to the Great Lakes are warm-water zooplankton found first in the relatively shallow warmer waters of the eastern basin of Lake Erie. Warming temperatures will help these species to spread. However, other species that have been established in the Great Lakes longer, which are adapted to colder climates similar to our historic temperatures, may decline as waters grow too warm for their preferences. more about Great Lakes invasive species

Can warmer water promote the growth of the annual Lake Erie algae bloom?

There is no single factor which causes an algal bloom. A combination of optimum factors such as the presence of nutrients, warm temperatures and lots of light all encourage the natural increase in numbers of blue-green algae in our waterways. Warmer temperatures can promote the growth of some types of algae. NOAA and our partners monitor Lake Erie and Lake Huron’s Saginaw Bay for the growth of a harmful algae that could pose a risk to human and wildlife health.

NOAA issues three Lake Erie Harmful Algal Bloom (HAB) Forecast products each year including regular forecasts of harmful algal blooms throughout the season. NOAA’s Lake Erie Harmful Algal Bloom Forecast incorporates a model that shows where the bloom is moving both along the surface and up and down in the water column. This is important because drinking water intakes pipes are often located near the bottom of the lake and any change in depth of the algal bloom will require changes in the way water treatment plants operate. The forecast can help the public and managers determine whether to take preventive action.

Are warm Great Lakes surface waters connected to climate change? Is this what we should expect in a warming world?

Warm waters are due to a combination of long-term warming and short-term natural variability. Warmer waters are consistent with long-term climate change and what we expect in a warming world, but more analysis is needed in order to determine whether one summer’s warmer lakes are strictly due to climate change.

Is wind a factor in water temperature regulation?

Yes, the presence of wind helps to stir up the lakes and moderate water temperatures - so an absence of wind can contribute to warmer than average lake temperatures. In early summer there was a high-pressure system that did stall over the lakes and during that period the winds were unusually low, so we observed a decrease in upwelling events.

Coastal upwelling in lakes occurs when persistent winds move warm water away from the coast, and move cold water from the bottom up to the surface. Here's a graphic from NOAA's National Ocean Service that shows how this happens.