Understanding the major effect of ice on the Great Lakes is crucial because it impacts a range of societal benefits provided by the lakes, from hydropower generation to commercial shipping to the fishing industry. The amount of ice cover varies from year to year, as well as how long it remains on the lakes. GLERL scientists are observing long-term changes in ice cover as a result of global warming. Studying, monitoring, and predicting ice coverage on the Great Lakes plays an important role in determining climate patterns, lake water levels, water movement patterns, water temperature structure, and spring plankton blooms.

NOAA-GLERL has been exploring the relationships between ice cover, lake thermal structure, and regional climate for over 30 years through development, maintenance, and analysis of historical model simulations and observations of ice cover, surface water temperature, and other variables. Weekly ice cover imaging products produced by the Canadian Ice Service started in 1973. Beginning in 1989, the U.S. National Ice Center produced Great Lakes ice cover charts that combined both Canadian and U.S. agency satellite imagery. These products are downloaded at GLERL by our Coastwatch program, a nationwide NOAA program within which the GLERL functions as the Great Lakes regional node. In this capacity, GLERL obtains, produces, and delivers environmental data and products for near real-time observation of the Great Lakes to support environmental science, decision making, and supporting research. This is achieved by providing access to near real-time and retrospective satellite observations and in-situ Great Lakes data.

GLSEA (The Great Lakes Surface Environmental Analysis) is a digital map of the Great Lakes surface water temperature and ice cover which is produced daily at GLERL. The lake surface temperatures are derived from NOAA polar-orbiting satellite imagery. The addition of ice cover information was implemented in early 1999, using data provided by the National Ice Center (NIC). Lake surface temperatures are updated daily with information from the cloud-free portions of the previous day's satellite imagery. If no imagery is available, a smoothing algorithm is applied to the previous day's map.

Graphs of Daily Ice Cover for the Current Season:

view this data as a table

NOAA/GLERL has been monitoring and documenting Great Lakes ice cover since the early 1970's using the ice products developed by the U.S. National Ice Center and the Canadian Ice Service. Research conducted on hydrometeorological processes and regional climate trends has led to models of lake thermal structure that play an integral role in ecosystem forecasting.

This database simplifies access to Great Lakes ice cover data by bringing the basic units of data together for the entire time period, 1973-present. The (now retired) Great Lakes Ice Atlas summarized ice cover for the period 1973-2002, with addendums in a separate report for 2003-2005, in addition to providing a number of statistical products. Using the same methods, the original ice charts for 2006 through present were processed and added to this database. In 2020, the entire dataset (1973 - present) was standardized to the newer, high resolution grid and is described in Yang et al. 2020.

About the raw data:
Original ice charts are provided in three forms: asci grid files, jpeg image files, and ArcGIS shapefiles. From 1973 through 1988, the source was the Canadian Ice Service. Beginning with 1989, the source was the U.S. National Ice Center, (NIC). Data from both Canadian and U.S. sources is combined in NIC's daily products. Files that align ascii grid data with location and lake are here: geographic metadata

GLERL conducts research on ice cover forecasting on two different time scales: short-term (1-3 days) and seasonal. GLERL's short-term ice forecasting is part of the Great Lakes Coastal Forecasting System, a model used by the National Ocean Service to predict wind, waves, currents, and more. These ice nowcast and forecast products (concentration, thickness, velocity, and vessel icing) are still experimental but being transitioned to operations. GLERL's seasonal ice cover forecast is based on statistical and physical analysis and is also experimental.

The following links to the pages which contain visual summaries of current Great Lakes ice conditions.

Research at NOAAâ€™s Great Lakes Environmental Research Laboratory (GLERL) has shown that the interannual variability of Great Lakes ice cover is heavily influenced by four large-scale climate patterns referred to as teleconnections: the North Atlantic Oscillation (NAO), the Atlantic Multidecadal Oscillation (AMO), the El Nino/Southern Oscillation (ENSO) and the Pacific Decadal Oscillation (PDO). These teleconnection patterns impact Great Lakes regional climate and ice cover by influencing the location of the westerly jet stream over North America (Wang et. al, 2018; Bai and Wang 2012). The position of the jet stream largely dictates the origin of the air masses (e.g. North Pacific or the arctic) that will reach the Great Lakes region as weather systems move across the continent. The temperature and moisture content of these air masses play a key role in determining ice cover. 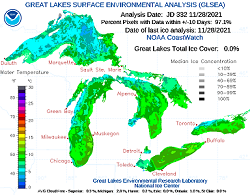 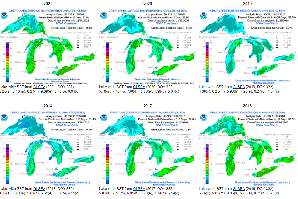 How do this year's water temperatures compare with the long term average (1992-present)?

When was ice cover the highest (or lowest) for each of the Great Lakes?

What does the long-term average look like for maximum ice cover?

Great Lakes ice cover experiences a LOT of year-to-year variability. This image below illustrates the long-term mean in annual maximum ice cover for 1973-2021.


Why does Lake Ontario generally have the least ice cover of all the Great Lakes?

Lake Ontario's extreme depth (86 m average; 244 m maximum) translates to tremendous heat storage capacity. It also has a smaller surface area for heat loss. In addition, cold air outbreaks from the northwest and west are moderated by the waters of Lakes Superior, Michigan, and Huron. These factors combine to keep ice cover on Lake Ontario at a relatively low level most years.

When does ice cover peak on the Great Lakes?

The relationship between ice cover, evaporation, and water levels is complex. Data on modeled evaporation shows that this process peaks in the fall, before ice cover formation. In a severe ice cover year such as 2014, the thermal structure of the lake could be impacted for the rest of the year, potentially reducing evaporation from the lakes next fall. Evaporation and precipitation are the major drivers of seasonal water level changes in the Great Lakes.

How does blue ice form?